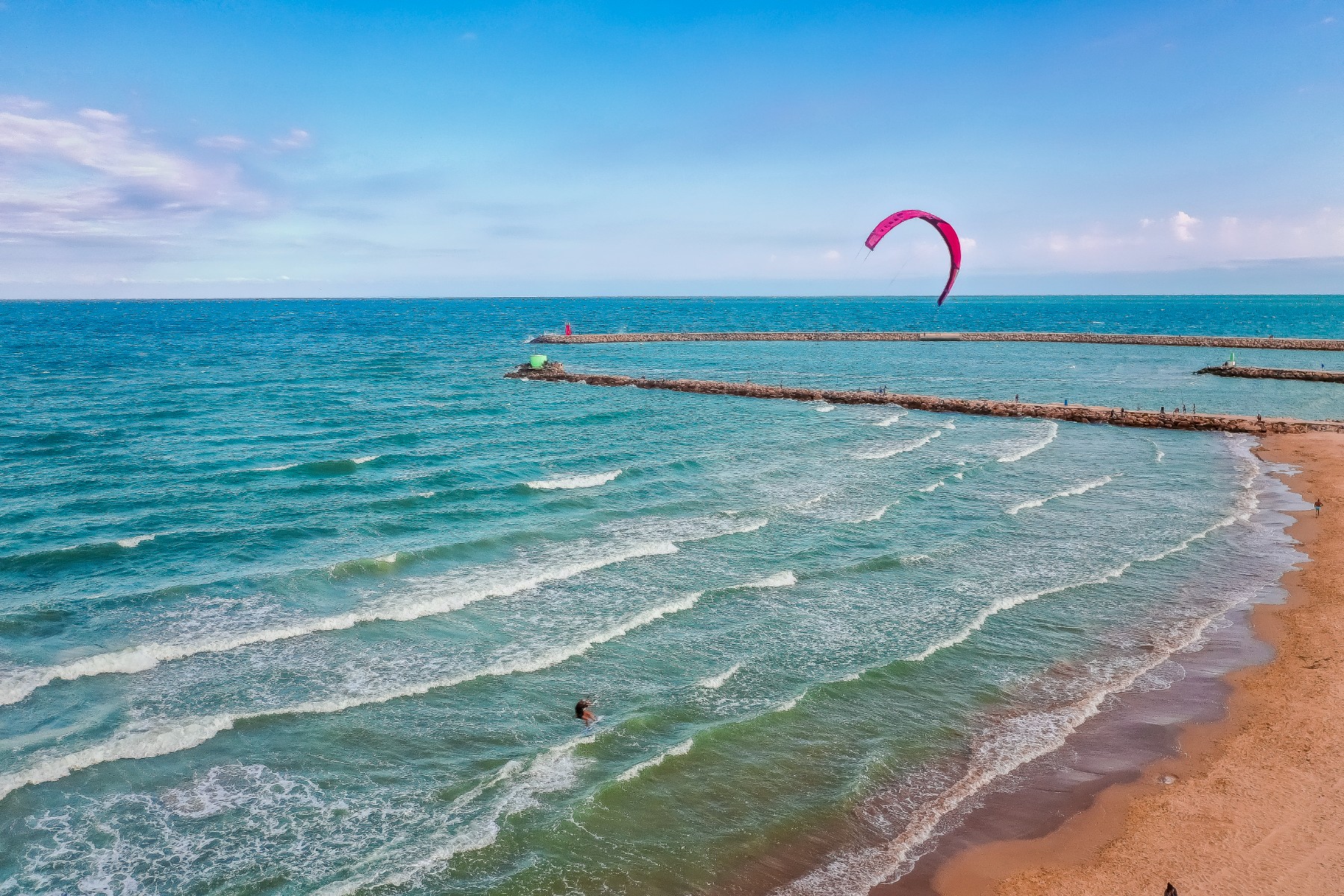 The Costa Blanca, also known as the white coast, has Spain's best climate and is perfect for those who love sun, just the right temperature and mild winters. The Costa Blanca also attracts with its countless strawberry places, beaches, its eventful history, culture, culinary encounters, sights and rolling landscapes with varied and beautiful nature.

Valencia, located on the east coast of Spain, is considered a core area of the Costa Blanca, and it is from this region that the Spanish paella has its roots, and the Valencian paella has become something of a Spanish national dish. No one can cook a better paella than a Valencian, and maybe that's because of the access they've always had to fresh fish, meat and vegetables. Paellan's home is also known for its wonderfully good oranges, lemons and clementines, wine and olive oil that are exported all over the world.

For us Scandinavians, the Costa Blanca became known only in the 60's when Calpe, Albir and Benidorm developed into holiday resorts, but it was not until the 80's that the development took off and became the Scandinavians' second home during the winter. The Costa Blanca has always been an attractive coastal area for Swedes who have either taken root or who come here year after year to enjoy the sunny coast.

The dream of sitting on the balcony, enjoying the sun and the gentle breeze from the sea has become a reality for thousands of Swedes who are tired of the long, dark winter in Sweden.

Today it is much easier than 30 years ago to buy a home on the Costa Blanca, it is only a few clicks away until you from your sofa at home in Sweden can join the home tour with your Swedish broker. Here you can find homes for sale on the Costa Blanca

The climate on the Costa Blanca

The coastline between the French border and Andalusia has long sandy beaches with coves. By long sandy beaches we mean really long, the Costa Blanca's coastline is a full 219 km long! For most of the year, the sky is cloudless and the temperature is very comfortable. The summer heat is mitigated by the sea breeze. The winters on the Costa Blanca are the mildest in all of Spain, there are more than 325 sunny days a year and the average temperature is about 20 degrees. What we in Sweden call a perfect summer is a normal winter on the Costa Blanca. You can leave the raincoat at home in Sweden, because rain showers do not occur at all often. Here you can plan an outdoor party and picnic without having to worry about either rain or warm clothes that we Swedes are used to. During the summer months, the water maintains an average temperature of 20 degrees and the temperature does not drop until well into autumn.

Golf on the Costa Blanca

The Costa Blanca was long regarded as the forgotten Gulf Coast. That is no longer the case. Thousands of golfers come here every winter to train for the Scandinavian competition season or to combine sun, swimming and golf. In the autumn, those who want to take advantage of the last sunny weeks of the year will come, as well as the families who have the opportunity to spend the winter or at least avoid Scandinavia's dark November and December months. In the 70's there was only one golf course here, now there are about thirty challenging and well maintained golf courses. How about playing on the popular Las Ramblas "adventure course" or some other courses such as Las Colinas, Villa Martin, Don Cayo, Alenda Golf, Oliva and more.

To see and do on the Costa Blanca

On the Costa Blanca there is a lot to explore, everything from golf, horseback riding along beautiful beaches to picking wild asparagus up in the mountains. If you are in Alicante, you can take the opportunity to visit the Algar waterfalls located in Les Fonts and take a dip in its natural springs. Up in the mountains is the small village of Guadaelest, which is considered one of Alicante's most beautiful small villages. From the top of the mountain with its bell tower you have an adorable view of the whole area. A must visit is Las Salinas de Torrevieja which is one of the most impressive natural parks in Valencia and is located near another water reserve called Laguna de la Mata. Las Salinas de Torrevieja stretches over 1,400 hectares called Chaparral, but is connected to the sea by a canal called Acequión.

Torrevieja is more than a golf lover's paradise. A few kilometers northeast of Torrevieja you will find the beach La Mata which is supposed to be one of the finest beaches in Spain. Here you will also find lagoons and many beautiful parks. The area around the salt lakes is said to be one of the healthiest places in the world. Torrevieja is home to the Torre del Moro watchtower, built in the 15th century. There is also a harbor, an old railway station and a beautiful 19th-century casino. In the harbor there is a submarine which is now a floating museum.

The famous heat sources can be found in Fortuna's about an hour from Torrevieja. Here you can visit the area's many historic spa facilities. Villajoyosa is known for its brightly colored facades in beautiful colors that were previously used to make it easier for fishermen to find a home. The oldest part of Villajoyosa reaches all the way down to the sea, and many Scandinavians live here. There are many charming shops and genuine restaurants.

Alfaz del Pi is the name of the coastal town that has become the Norwegians' favorite on the Costa Blanca. There are more Europeans living here than Spaniards, and every fourth person you meet is a happy Norwegian. Benidorm is the number one tourist resort and there are many hotels, restaurants, entertainment and nightlife. In Benidorm there is fun Terra Mitica, where there are carousels and attractions. There is also Terra Natura Zoo which is a combination of zoo and amusement park as well as Aqua Natura water park with different kinds of pools, water slides and beach area. Benidorm also has the Aqualandia water park with 15 water attractions and Europe's longest water slide.

Markets on the Costa Blanca

The markets are a tradition in all Spanish societies and you usually have a market one morning a week. There is also a fresh produce market where you can shop every morning before the siesta, and antique markets that are often on Saturdays and Sunday mornings.

Castillo Homes - Our Swedish broker in Spain on the Costa Blanca

Many of the hundreds of Scandinavians who have found their dream life on the Costa Blanca have found their home with the help of our Swedish brokers at Castillo Homes. We help frozen northerners to find their little paradise in Spain, safely, comfortably and easily. Our Swedish brokers have lived in Torrevieja for many years and know the region well. Castillo Homes is also a full-service agency and collaborates with the best craftsmen, architects and interior designers on the Costa Blanca.

It is very important to us that you feel well taken care of and safe when you make a home purchase with us. Therefore, we have built up a solid team of legal expertise, construction companies, architects, interior designers and moving companies. Our network is solid and guarantees that you as a buyer or seller save time and money and can feel safe and comfortable with the whole process.

Security for you who are gonna buy or sell a home

We at Castillo Homes are responsible throughout the entire process so that you who are buying and selling a home will feel safe and comfortable and avoid unnecessary stress that a housing deal can entail. Trust that our brokers take care of everything as efficiently as possible, we only provide homes with reviewed documentation. Once the sale of the property has been processed, we follow up to formalize if necessary, such as changes in delivery, ownership, taxes, etc.

We will provide you with all the necessary documentation to present it to a notary. This bureaucratic step can be somewhat complicated, so our realtors will always give you advice on the best decision for our clients. We are used to dealing with customers from all over the world.

We speak English, Swedish, Spanish and can make ourselves understood in several other languages. Making you as a customer feel safe throughout the process of buying or selling a property is a crucial factor for Castillo Homes. Linguistic misunderstandings are a common pitfall for foreign customers, so we translate all documents into Swedish.

If you live outside Spain, our real estate agency will help you request an identity document and a residence permit so that your stay on the Costa Blanca is as comfortable as possible. In addition, we can also make sure to request a bank opening for any payments and your income. All according to proven and secure banks.

Marketing of your property

Castillo Homes will market your home in various Spanish and international real estate portals to find a buyer as quickly as possible. We also use other popular marketing channels such as Idealista, Blocket, Kyero among others.

Renovate a home or build a new one?

If you are thinking of building new, renovating or rebuilding your home in Torrevieja, Costa Blanca, Spain, we can help you. We have a solid network of architects, carpenters, plumbers, electricians, painters, construction companies and can ensure safety and efficiency at all levels. Read more about Castillo Construction